Windows 10 Operating System post looks into the new Windows 10 operating system. You will learn about security, backups, techniques and much more.

Latest News: I have added another documentation to the list.

Microsoft, Encarta, MSN, and Windows are either registered trademarks or trademarks of Microsoft Corporation in the United States and/or other countries. Click on the following URL General Microsoft Trademark to learn more.

Windows 10 is smart, fast and easy to use. I can tell you straight away that I am very pleased with the way this latest Windows operating system functions and performs. I am sure many of you will agree with me. I also know that this new version will have bugs and issues with other hardware, software and drivers. But the good news is the patches are released regularly and fast. Also Windows is here to stay.

Microsoft has released the latest service pack. The latest version is 1803 (June 26, 2018). Click on the following URL Windows 10 Versions to learn more about the latest release.

The following URL list-freeware-releases-from-the-windows-club has some great tools to help you run, manage, troubleshoot and more.

Step 1 ) The following image shows you the new start up menu in Windows 10. It is very similar to previous Windows versions but has a lot more information, much smoother and faster. It also has apps and other tools including the popular Cortana search feature. 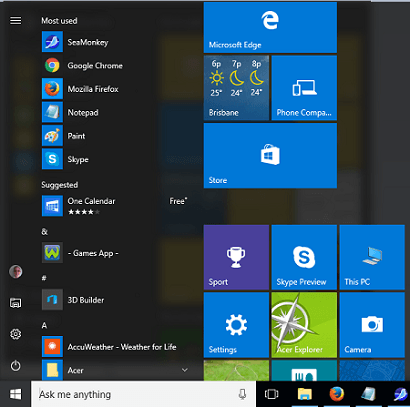 Step 2 ) The following image shows you the new File Explorer. It is fast and easy to use. Simply click on File Explorer to view the most Frequent used or visited files or folders in your system. 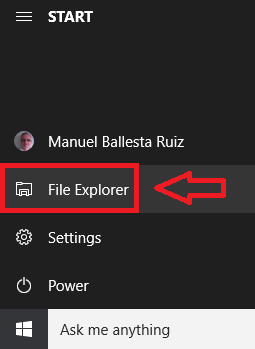 Step 3 ) The following image shows you the new All Apps displayed in the menu. In previous builds you had to click on All Apps, but now all apps are simply part of the menu. Another words it is part of the displaying menu. All you have to do is scroll up and down to view all your apps. Alternative you can always search in Cortana by typing the name of the app.

In conclusion the performance and speed is incredible. If you are a Windows user and supporter I encourage you to purchase and download Windows 10.

Click on the following URL Settings & Security to continue with the next tutorial.

I will be adding more information in regards to this pre-release version.

If you have any questions please let me know.

I have been working in IT since 1999 and I enjoy the challenges it brings me. I love developing websites with WordPress. I spend a lot of time helping out in wordpress.org forums. I have been writing tutorials since 2011. Now I am learning how to manage my own VPS "Virtual Private Server.

Your information will be used to send you Blog updates. You can change your mind at any time by clicking the unsubscribe link at the bottom of any email that you receive from me. You can find details about mbrsolution privacy practices here.

If you find my site helpful, you can buy me a cup of coffee. Click on the following image. Thank you for your visit, enjoy my site.